While flying all over Europe I kept my mind busy over astrodynamics and satellite attitude control subjects. I had to miss the midterm exam about astrodynamics due to lack of time to study and I was afraid of having wasted an opportunity to pass this course. In January I did the 2nd exam about the Restricted 3-body problem, Space Environment, Interplanetary Trajectories and Attitude Dynamics and Control of Satellites and I was only able to get a 8.7/20 grade since Rigid Body Dynamics it's not my favorite subject and once again lack of time to study (work, work, work...) prevented me from reaching a higher grade.

The choice was obvious... Time available was not that much and Astrodynamics is a fascinating subject for me. I was confident enough I could easily pass Exam1 while having an average >9.4 in the two exams, even though I missed all classes about the 2-body problem and my colleagues' marks in the midterm exam were quite bad. How could a subject which only involves the knowledge of the ellipse geometry, one trajectory equation and two laws of conservation (Energy and Angular Momentum) be that hard? Of course there are many other details/definitions and many ways of doing the same orbital maneuver.

Rendez-vous was one of the maneuvers studied and it also the name of one of Jean Michel Jarre's greatest hits which inspired me during my study.


Now I'm only two courses away from finishing my Degree (BSc) in Aerospace Engineering! This term I will fall again bellow Kármán line and return to the winged craft theme. I will have Aerodynamics and Flight Testing to do. While Aerodynamics is the continuation of Fluid Mechanics - which I had last year - Flight Testing is a complete new subject to me.

Finally, I take this opportunity to show our "morning star" - Venus... 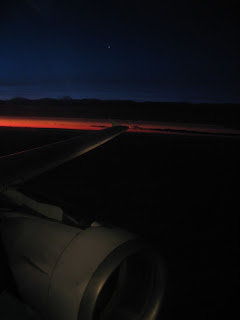 and the rise of the most beautiful star we know as seen from 38000 ft above Earth's surface. 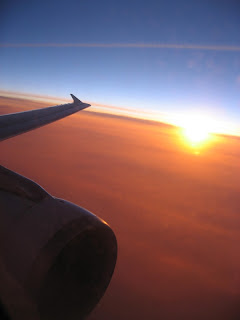 And don't forget next Thursday (if weather permits) we will have the final launch of Space Shuttle Discovery as STS-133 mission will take place.
Publicada por LisbonJet em 8:45 AM No comments: