Flying with TAM, TACA and LAN

Last holidays I decided to visit Peru. After spending two days at São Paulo it was time to fly to Lima, the capital of Peru. I chose TAM for my trip although their fares were quite expensive (GRU-LIM-GRU for 995.74 USD).

The aircraft was an A320 with a retrofitted cabin and equipped with TFT screens under the overhead bins as part of their IFE system. TAM also provides free earphones. Since I spent part of the flight sleeping, I missed seeing the Andes before our descent to Lima.

Their on board service for this flight consisted of a hot breakfast after take-off served on a disposable tray. Two options were available: scrambled eggs or a hot sandwich. Knowing very well aviation eggs, I opted for the sandwich. Then, they proceeded with their sales service and before landing they distributed peanuts and more drinks to the passengers. The aircraft was full and cabin crew were kept busy during the entire flight.

The main purporse of this trip was to visit Machu Picchu, one of the New 7 Wonders of the world. Cuzco is the nearest airport.

Our flight was delayed for almost 2 hours due to poor weather conditions in Cuzco.
It was my first time with TACA and also my first time flying on the E190. This type of aircraft is very very comfortable and in many ways reminds me a smaller A320 but with a 2-2 configuration and smaller overhead bins. The wing, the number of canoes and configuration of flaps and ailerons are almost an exact copy of the A320.
PTVs were available in all seats which is surprising for an aircraft specifically tailored for short-haul flights.

During the short flight (about one hour of flight time) TACA presented us a very nice service with a hot sandwich and an amazing variety of beverages including whiskey and vodka. Plain water was fine for me. 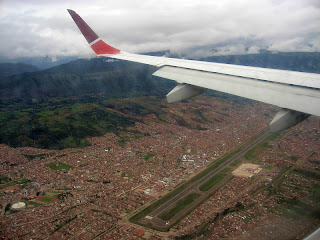 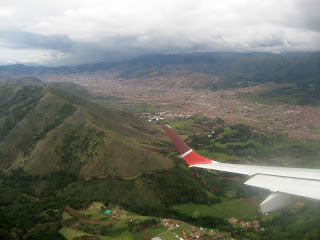 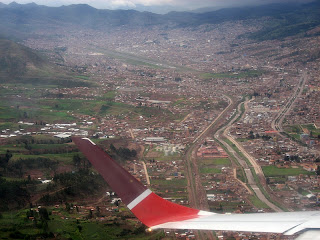 And a couple of photos taken at the airport.

We decided to buy the return flight to Lima with a stop in Arequipa since it was cheaper.
My seat was next to an overwing emergency exit with extra leg room and I was instructed by a Flight Attendant to read the safety card carefully. Of course I did it just before he told me. The technique for opening the window is no different from the A320.
This flight didn't have any kind of on board service so I was enjoying my window seat and the beauty of the Andes seen from above. 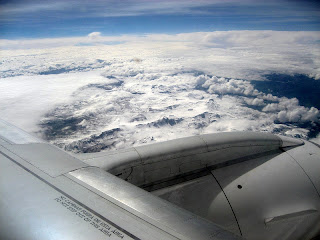 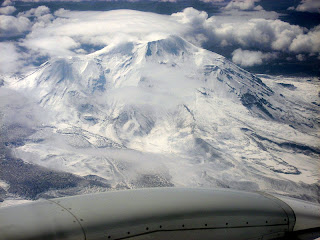 
And our E190 after our arrival at Arequipa. 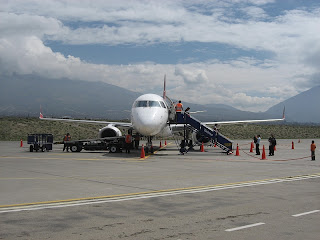 We had to wait almost 3 hours for our flight to LIM. Arequipa lies in the Andes mountains (2335 m) and is surrounded by some big volcanoes.

The terminal is very small but it has a large observation deck, so I spent some of the time watching the traffic.


And finally our Embraer arrived... 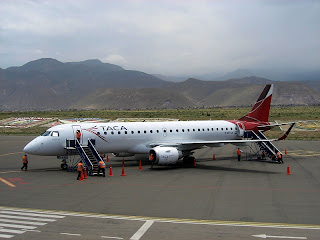 Boarding time! Going back to Lima. 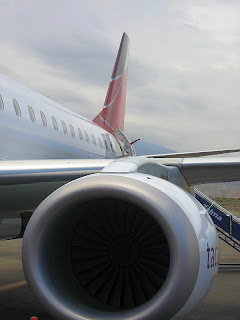 As this flight was a little bit longer, we had the same type of service I described in the LIM-CUZ leg. However the sandwich was tastier than the previous one.


Overall, it was a great experience flying with TACA. They have modern and comfortable aircraft, efficient cabin crew and nice catering. They are part of the AviancaTaca Group and soon will join Star Alliance.

This was a codeshare flight operated by LAN, a great opportunity to fly the 767-300. The only 767 I flew until then was a very old BRA 767-200, originally delivered to TWA.
At the check-in I asked for a window seat. I was told that there was only one window seat available but it was in the last row without more explanations. I thought that those seats wouldn't recline because of the bulkhead. But for me it was more important to have a window to lay my head and sleep than the ability to recline the seat. In fact, with regular economy seats I never use full recline - not even half - because after some time you start feeling uncomfortable with the lack of lumbar support.

To my surprise, when I saw my seat I realized it was a high comfort/crew rest seat used by crew members on long haul flights! Even the curtain that ensures privacy was there although not used during this flight. I couldn't have more luck! A supper with two options was served (I chose the pasta) and we had some light to moderate turbulence during the flight.

This 767 from LAN Airlines is pretty new since it was built in 2007 and already came with the 777 interior design which is way more appealing and provides more space for hand luggage in the overhead lockers. However, the blended winglets were a retrofit.

Unfortunately, as holidays were coming to an end, my final destination was Lisbon, not São Paulo. After waiting 8 hours at Guarulhos Airport for the TAP flight I was airborne again but this time enjoying Business Class service and wonderful Recaro (almost) lie-flat seats. The airplane that took me back to Lisboa was the Airbus A330-200 CS-TOH with Star Alliance livery. It was a smooth flight.

Now I'm back to work and to my studies!
Publicada por LisbonJet em 1:35 AM