Everything started with this flyer I found in Airliner World magazine:

I had never attended an international airshow and I was waiting for this opportunity for several years. After seeing that flyer I checked my roster for the weekend in which the airshow was opened to the general public. Saturday morning I was arriving from Munich and then I had a couple of days off. Almost perfect!
Next step was defying an old friend of mine to come with me. I called him and as I thought, he still continues crazy enough to accept these kind of chanllenges :) Eventually another 2nd friend would join this adventure and the same three guys who spent a weekend in New York in 2006 "just to buy a digital camera" were together again!

This day started very early for me at Freising (Munich). Wake up call at 3:50 am (2:50 am, Lisbon time...) and then a flight to Lisbon. The flight departed with some delay and as I had a short connection time to get the first available flight to London, I was a little bit worried. But guess what, flight to London was also delayed and I even had time to change clothes and leave my uniform in my car!

The flight to London was full and since we were flying with staff tickets we were the last ones to have assigned seats which were obviously separated seats. So I just used the flight time to sleep and regain energy for the day. I didn't even eat the usual sandwich served on these flights.

We landed at Heathrow Airport and then went to our hotel (Crowne Plaza Heathrow) to leave there our things and go immediately to the center of London. Even if our flight didn't arrive late we had already decided that in the first day we would be visiting London and not going to the airshow. Arriving at 13h00, leaving the airport, waiting for the bus to the hotel, then 1 hour of trip until Waterloo train station plus the train until Farnborough, wouldn't leave much time to see anything that day... So we just enjoyed London, caught some rain, bought some aviation books and had a great dinner at a Thai restaurant.

We had bought our tickets online in advance so we were benefited with discount and would avoid a waiting queue at the venue of the Airshow. We also rented a car and the most experienced driver of us took it until Farnborough with the help of a GPS. I think I wouldn't dare to drive in London any day. It's easy to understand that everything is opposite: the steering wheel on the right side and taking the left side of a road. But having to fight against my automatic skills in a strange and unknown place would be too much for me!

Everything just went fine and we got in the airfield without getting lost. Also everything was so well organized that made things easier for the visitors. When we arrived, the weather was great: sunny with some scattered clouds although they would become broken clouds later that day.

We had to pass through security check control (just like in the airports) and we were ready for the airshow!

This aircraft was on static display near the entrance so it was the first airplane I saw. Being a L-1011 lover,  of course this modified DC-10 caught my station. The DC-10 was the main competitor of the L-1011 in the 70s and it is a similar aircraft in having a 3-engine configuration. One could see that this particular aircraft was a former -40 series by observing the shape of the #2 engine intake which is rounded instead of being straight.


Omega offers commercial in-flight refueling services and you can learn more about them here.

Now it's time to go for Airbus!
I didn't lose much time with the A400M but it seemed to be at least a beautiful aircraft.


Its rival, the Lockheed C130J was also present at the static display.

The tiniest member of the Airbus aircraft family - the A318 - was brought to the airshow by British Airways. 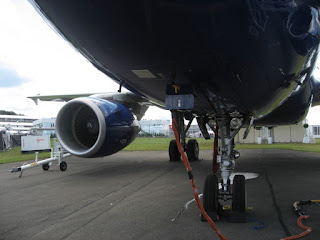 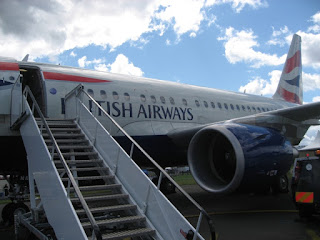 In fact, this is an 'A318 CJ Elite' fitted only with business class seats and used on the LCY-JFK run.

-o0o-
Some landing planes during the Airshow...


Wow! This big airplane really caught our attention. And it was worth the wait in the queue to get inside. 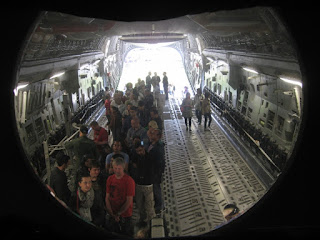 As we were leaving the C-17, the A380 was just starting its airborne display.

After the tiny A318, let's go see the biggest in action! Although I have already flown the A380, I had never saw it doing extreme maneuvers. It's always an impressive sight and it handles very easily in the air despite its gigantic dimensions.

Descending while in roll to the left... 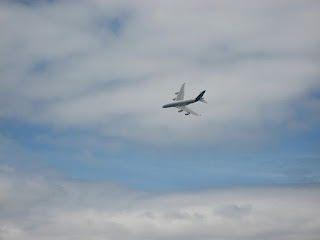 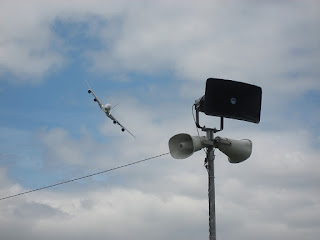 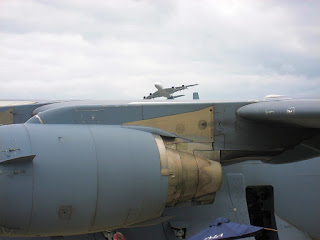 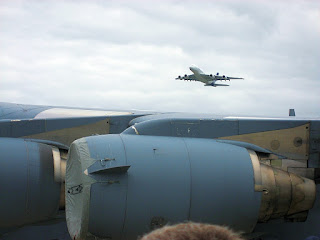 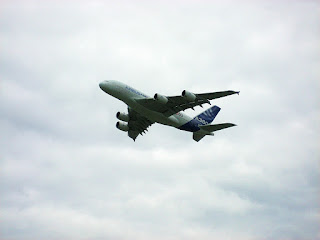 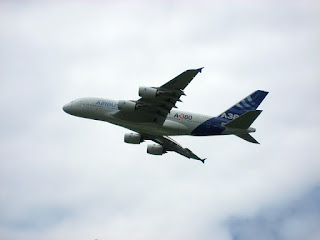 Climbing with a steep angle... 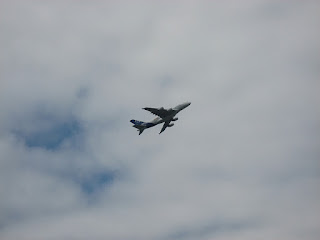 And finally landing in the middle of the crowd. 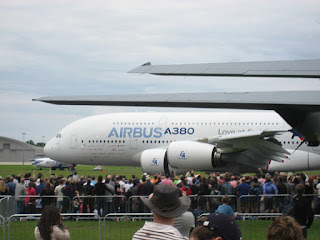 After the display, again in its static position.


And one aircraft of our Portuguese Air Force:

During the last hours of the airshow we would enjoy the displays of the beautiful Avro Lancaster bomber aircraft and of the Red Arrows, the proud of the UK.

We also paid a visit to the Airbus shop and to the Virgin Galactic stand.

Unfortunately we couldn't wait for the Avro Vulcan display, the last one flying in the world. We had to return to Heathrow to catch the last flight of the day to Lisbon.

As we boarded we were kindly invited to Business Class. So we had nice food and wonderful wine on our return flight. A great way to end a fantastic weekend.

With love from the Red Arrows... 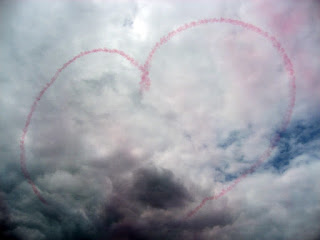