I just can't get enough of this city 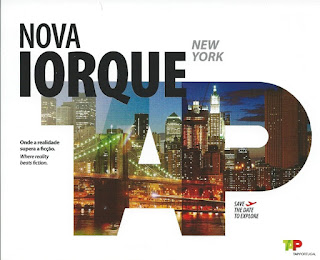 New York... of course! The city that never sleeps. Today's journey commenced with a dead head flight to Porto, flying in one of those tiny but comfortable ATR 72 operated by White Airways for TAP Express.

I spent the 1-hour flight reading this book : Skygods - The Fall of Pan Am.

Pan Am was one of the biggest and greatest airlines ever. At some point of its existence Pan Am and Commercial Aviation, as we know today, were synonyms. It was due to their visionary and historic leader Juan Trippe that Boeing built the Boeing 707 and 747: "if you build it, I'll buy it". After all these years, it's still shocking that such a great airline was allowed to go "Tango Uniform". Pan Am had its headquarters precisely in New York/Manhattan. So I thought it was a good option for this trip.

Soon we would be on board of our mighty and sleek Airbus A330 heading towards Newark Liberty Airport. As we were flying out of Porto, the scheduled time of arrival was considerably later than I'm used to when departing from Lisbon. So I didn't even consider going to Manhattan on the first day. Instead, I joined my crew and went for the first time to Seabra's Marisqueira in Newark which is a portuguese restaurant very popular among the crews. Even if I was not too hungry (I had dinner on board) I enjoyed a wonderful seafood soup.

The next day it was time to discover Manhattan one more time. I had a short to do list including buying a music CD that I couldn't find anywhere in Portugal. But the first thing of the list was to spot a NY cab with a top advertisement of "Portugal Stopover" program by TAP Air Portugal. I was really curious because they already had the slightly modified logo of the airline that, to my delight, decided to readopt the old trade name of the 80s instead of the short "TAP Portugal" that never made sense to me. I love the current and more colorful monagram but I was never too fond of the associated trade name. The name TAP Air Portugal also reinforces the statute of TAP as a legacy carrier.

To my surprise I didn't have to wait too long. As soon as I arrived in Lower Manhattan/WTC I found one... and then another one... plenty of them! Wow! A small airline of a small country being on the spotlight in one of the greatest cities of the world - really amazing this campaign. A total of four countries among our network, with a stopover in Portugal, were publicized: France, Italy, Morocco and Spain. In fact, a total of 400 taxis were circulating with TAP Air Portugal's ads.

Enough of taxis! New York has, as always, so much to offer. My final item in the to do list was to search for the CD I mentioned. I walked in the uptown direction towards Union Square where there is a Barnes & Noble store (later I found there is another one in the 5th Avenue). I was lucky enough to get the last example available of the CD I was looking for!

Because I was alone, I decided to have a fast lunch in a McDonald's at Union Square and save time to explore the city.

My first stop was Chelsea Market, a food hall I wanted to visit and then I proceeded to the High Line. 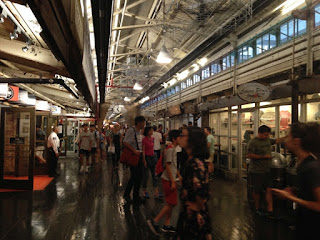 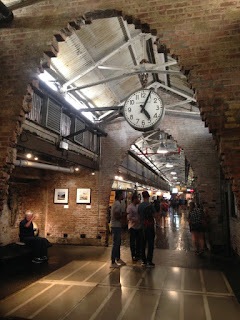 From an aesthetic point of view I found it interesting but I have some doubts I will ever consider it as an option of a place to have a meal if I'm alone. Too many people and tourists...


It was only in December 2014 that I first heard about the High Line which opened to the public in 2009. The High Line is an elevated linear park/rail trail created in 2009. I made the entire 2.3 km trail running from Gansevoort St to W 34th St in March 2016 but most of the vegetation was still showing signs of winter burn, so I felt it was worth to explore the High Line again. 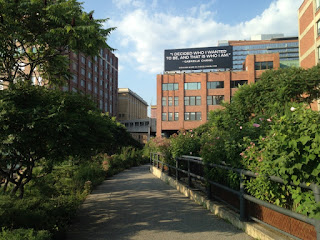 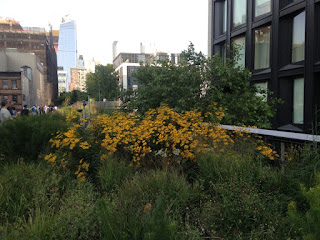 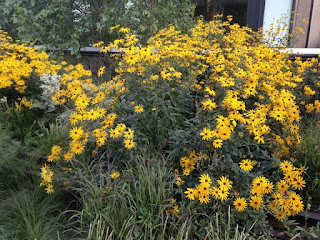 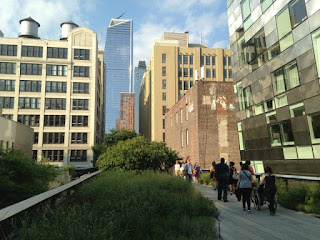 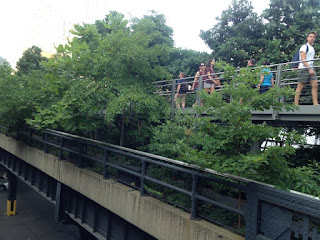 I've seen it so many times before but I always feel compelled by the big electronic/digital billboards. 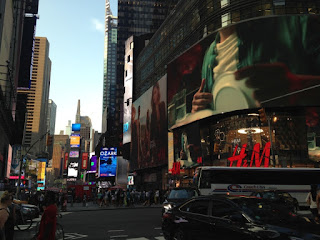 Alitalia filed for bankruptcy a few days before my visit to New York but they still had money for some impressive advertisement. 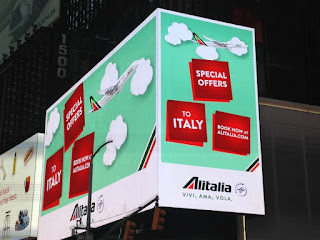 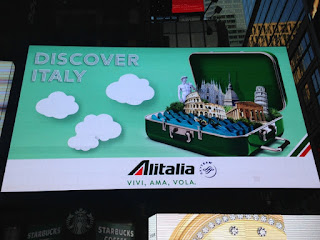 Marriott Marquis where I used to stay when landing at JFK Airport: 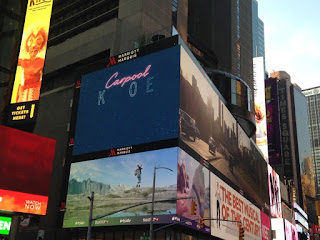 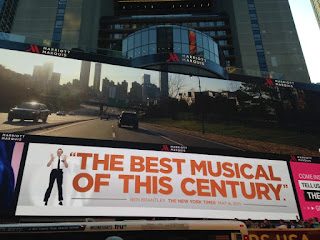 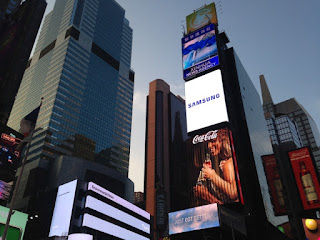 
MetLife Building was once the headquarters of the "World's Most Experienced Airline" Pan Am that went bankrupt in 1991. Many New Yorkers still refer to it as the Pan Am Building. The brutalism style and its visual impact is controversial. 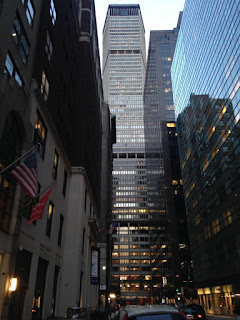 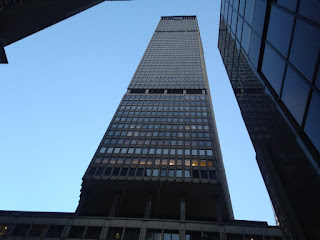 Metlife Building was built adjacent to the Grand Central Terminal - an impressive train station serving New York. Both buildings lie in the middle of Park Avenue. 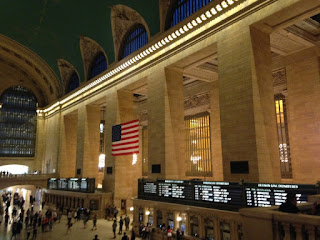 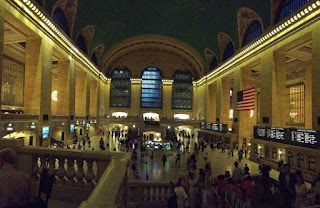 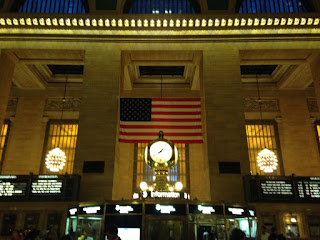 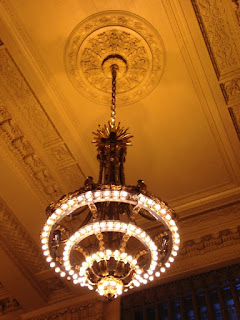 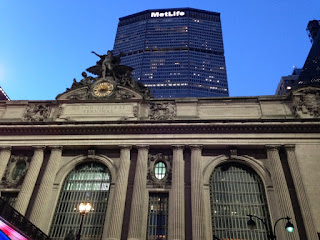 
But my all-time favorite is indeed the Empire State Building with its setback architecture style! 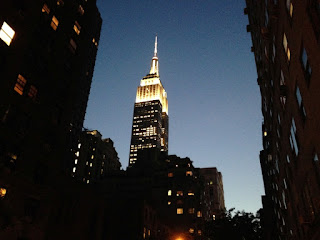 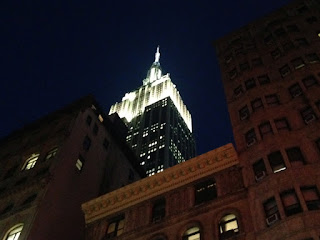 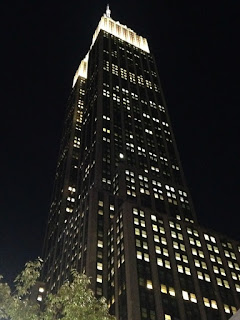 Soon it was time to start thinking about returning to the hotel. I would catch the PATH train back to Newark from the WTC Transportation Hub, dubbed Oculus.

Designed by Calatrava (everyone would guess it...) the Oculus is for sure a stunning structure. 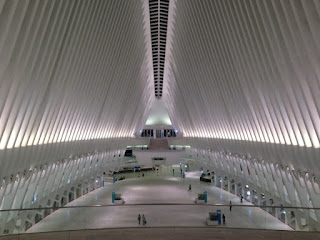 I think there was some ongoing Fire Alarm System testing while I waited for my train...


New York... never disappoints me! I just can't get enough of it.
Publicada por LisbonJet em 12:12 AM